Waking up in Urumqi! 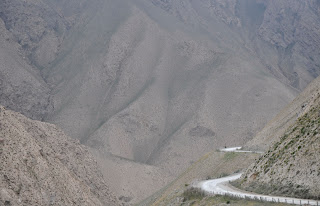 Since we have been “intercepted” by the PSB on October 14th it has been like a never ending bad dream....that finally lasted 7 days. Everyday brought us more surprises and the absence of any “western” logic in the way they handled us made it absolutely impossible to predict what would be the final outcome and when it would be!

We were finally “released” in Urumqi (we had to fly here from Kashgar) with our passport free to continue our travel. I know you are anxious to know all the details of our week with the PSB but first I want to share with you this amazing month of cycling through western Xinjiang province and into Tibet and give you some background information on this “famous” route.

After our great journey through Tajikistan and Kyrgyzstan, the plan was to cycle from Kashgar to Kathmandu, Nepal. 2500km through one of the hardest cycling route in the world. This route is described as the Western Tibet route. The trailblazer guide Himalaya by bike gives a good description of the road. (note: the author has not cycled the road but gather info from other cyclists who did it!)

“This isn’t a pre-packaged “adventure” sterilized by the constraints of insurance and health & safety. It is a long, lonely route with terrible road conditions, sustained high altitude, little in the way of supplies and potential problems with the Chinese authorities. ...this western route is unbeatable if you want remoteness and the sense of a truly epic journey...There aren’t many places where you can experience that level of isolation, particularly on a bike. If things go badly wrong you’re days, even weeks, from medical help and there’s no way of getting a helicopter to airlift you out”
﻿
﻿ ...You will be travelling illegally, at extreme altitude on a terrible road with little in the way of supplies. Strong winds are the norm. Your reward is an amazing sense of isolation, astonishing desert and mountain scenery, the feeling of being on an epic journey and one of the greatest cycling adventures in the world. The first section crosses the fearsome Kunlun Shan mountains, one of the most inhospitable and remote mountain ranges on the planet. The next section is the infamous Aksai Chin plateau, previously part of India but annexed to China in 1962. Although its altitude is around 5000m, it’s mostly flat with rounded hills and snow-capped peaks in the distance and looks like a set from Star Trek.” (extract from Himalaya by bike - Trailblazer)


After completing the “eastern route” in 2005 (www.celineandsteve.com) I really wanted to do the “western route” one day but unfortunately in the meantime things have changed in China (for the worst!) until 2007 the western route was illegal but the PSB didn’t enforce the law like they did in the east so many cyclist did it without having to “hide” and pass the checkpoint in the middle of the night like we had to do in the East. They would pay a fine in Ali and get a permit to continue their journey to Lhasa or to Nepal. No big deal! Since 2008 (Year of the Olympic and trouble in Tibet) they have decided that ONLY group with guide, jeep driver and permits would be allowed on the road so in 2008 and 2009 cyclists were stopped at the first checkpoint and denied access to continue. We were hoping that in 2010 things would slowly return to “normal” and the Chinese authorities would start to “relax” again but believe me they are NOT relaxing at all!!!! They are chasing cyclists with great pleasure! On our way to the “illegal” road we met a Spanish cyclist who had been caught by the PSB a couple of days in, had to pay the fine and was asked to cycling back to Kashgar. This sounded like an acceptable risk for us. It was not looking too good but we decided to give it a shot and see how far WE could go......

Wow, it looks like you guys had a quite a journey. Sorry to hear about the trouble with PSB.

I did the Western route in '06 when things were peachy. Was planning to go to China/Tibet on a bike again in fall '11 or '12 but if things don't improve will probably go to South America, most likely Bolivia's Altiplano to get my regular dose of high-altitude cycling;)

BTW, cannot wait for the rest of your Tibet story to come up. Thanks for sharing it and tailwinds all the way...

Hi, I've been following your ride, and I was very interested to see if you'd be able to make it all the way into Tibet. It's a real shame you were turned back at Ali, but great that you managed to make it all that way, and through the Kunlun Shan and across the Aksai Chin. Any feelings on if it will be possible to go all the way in the future?

Hi guys,
Thanks for your comments.....I am in Kathmandu getting organized for some trekking...hope to hit the trail on Nov 5th at the latest. In the meantime I will post more about the Tibet route and the bads guys (PSB)!!!!!!!!!!
C.