First Checkpoint....riding with the moon!

﻿﻿ The first 3 days out of Kashgar are not very exciting. I could not ride for very long in these conditions. It is the south silk road in direction of Hotan. It borders the Taklimakan desert, it is flat, hot and dusty and to make it worst there is lots of traffic. I could not wait to get to the mountains! On the good side we could stay in descent hotel (when we could find one accepting gringos!). One night at around 12:30am someone knocked at our door. Anne got up and open the door to find the police...not again!!! They were not looking for us because we heard them knocking on all doors. We never found out what they were looking for!!!! There are so many police in this country it is unreal.
In one of the small town we met a funny character. We stopped to buy some food and as usual a crowd gathered around us. Then a teenager boy who I named “forest Gump” was very excited about our presence. He knew few words of English and was very proud of it. When we left he started running beside the bikes and kept running for few kilometres. He was running pretty fast!! Not sure why he was running but to say the least it was entertaining.

Then slowly we start climbing again. As a warm up we climbed 3800m pass then start riding in a beautiful gorge until we arrive 5 km before the first checkpoint (Kudie). That is when the ride becomes “illegal”.

Going through the checkpoints is a little nerve braking the first time but after that one get use to and they are more less all the same. The idea is to cycle in the middle of the night when no one is around or sound asleep. To do so we have to camp (hide) no too far from the checkpoint, get up and pack in the dark and ride the bicycle with our headlamp to the checkpoint, ride under or around the barrier and continue until well pass the checkpoint. The “level” of difficulty depends on the road conditions, the temperature, the size of the town and the number of dogs chasing you!

Kudie was an easy checkpoint. The road was paved, it was warm and it is a small settlement. We had a couple of dogs chasing us before arriving to the village but they weren’t bad at all. They bark but shining our headlamp at them and screaming usually scare them away. If that doesn’t work we must stop and through a couple of small rocks at them. They know what an arm in the air means, sometimes just the gesture of throwing something is enough! They are not pet they are either herders dogs or free dogs!


The real challenge is to not be caught AFTER the checkpoint. Earlier this year two Dutch cyclists were arrested 10km after Kudie and the Spanish cyclist was also arrested not too far from there so I suggested to ride only until 6AM then camp (hide) for the day and ride again only in the evening for a couple of days so that they would not find us on the road if ever they look for us during the day. It was a good idea for the first night. We were still on a paved road and we had a nice moon. We didn’t use our head lamp. The issue was that as we got higher it was colder. Find a camp spot at 1AM in the dark at -10 is not easy! Finally the 3rd night we had to ride over a 5000m pass on a very bad gravel road. It became clear that we were not going to make it before the middle of the night so at 8PM we hitchhiked a ride over the pass. A big Fuel truck stopped and we managed to get all 3 bikes on the roof and all luggage in the cabin. The driver wasn’t too thrill about it but didn’t have the heart to leave us there freezing! He must have wonder why on earth people would do this!!!! He took us about 40km to a small settlement called Mazar. We ate and slept there and got up super early to go. From Mazar we had decided to ride during the day time (get out of the closet!) and see what would happen. It is a strange feeling, first I thought we would be arrested the first day, then slowly forgot about it. The beauty of the landscape and the pleasure of riding there makes one forget about the potential problem. Then we saw police cars passing by us and nothing happened so I start thinking that if we pass the checkpoint maybe we will be able to get through....It reminded me so much of the East that as the days and the kilometres went by I felt confident we could make it.

There aren’t too many town along that route apart from the amazing landscape. Most of the time we camped or we stopped in the small truck stop along the way. Most of them also have small shops where we could buy food. In few occasions we slept at some road worker shelters or in some abandoned herders buildings.
﻿
﻿
It is hard to describe the truck stops. They are VERY basic buildings where you can eat and sleep. Most people I know would not even consider eating or sleeping in a place like this. By Western standards these places are below any standards but let me tell you they were like Heaven to me when I get there hungry with my feet numb from the cold!!!! Of course these places don’t have running water or toilet....when you ask where are the toilet they show you “outside”!!!!


The road is very bad, sand, rocks and washboard from hell. Add to this a strong headwind and cold temperature it was hard work and we didn’t cycle very far each day! One day we had a sand storm which turned into a snow storm. We could hardly find a place to eat lunch sheltered from the wind. At that point I wasn’t too sure I had warm enough clothes to undertake the Aksai Chin which was going to be even colder.
﻿
﻿

The air is VERY dry in this area and with the cold I had lots of issue with cracks at the tips of my fingers. At some point things like reallocate gears, tie my shoe laces, type on my laptop and other manual tasks requiring fingers dexterity were very painful! Now i have thick callus on my finger tips!!! Very feminine:-) 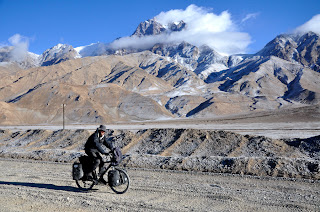 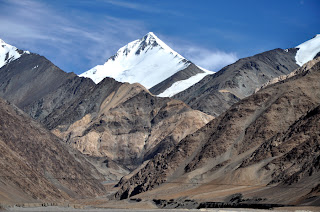 In terms of food I noticed that there are a lot more food in the west than in the east 5 years ago. Maybe because this road has a lot more truck traffic than the East but food wasn’t an issue. In 2005 Steve and I lived for 23 days on 2 minutes noodle soup and army bars and there were no truck stop on the way so we had to camp every night. This year we still had 2 minutes noodle soup 3 times a day but the taste of the army bars have been greatly improved and we could also buy cookies, moon cake, sausages, chicken thighs in sealed packages and few other items. Also every few days we were able to get a real meal from a truck stop.


Slowly but surely we finally reached km500 and shortly after the famous “cyclist museum” (km512). It is a road worker abandoned building just before a big pass and lots of cyclist (western and Chinese) have written graffiti on the walls with bits of coal found on the floor. We didn’t see any western cyclist for 2008, 2009 and 2010!!! You can see the graffiti done by the “guru” of cycle touring in Tibet a Swedish guy name Jane Corax. He has been an inspiration for lots of cyclists. The also very famous Yakman (Claude Marthaler from Switzerland) has been there a couple of time. In the morning before leaving we also added our graffiti to the museum! Cool!
﻿﻿﻿﻿﻿
﻿﻿﻿﻿﻿﻿﻿﻿﻿﻿﻿﻿﻿﻿﻿﻿﻿﻿﻿﻿﻿﻿﻿﻿﻿﻿﻿﻿﻿﻿﻿
﻿ Next episode....