Lhasa, May 2005
In 2005 I rode my bike from Bangkok to Lhasa with my ex-partner. Since that day I have dreamt of cycling to Lhasa from the West (Kashgar, China). Like many other cyclists I have been inspired by those who cycled these roads before us and by the desire to find myself surrounded by the immense beauty of the Himalayas landscape one more time. 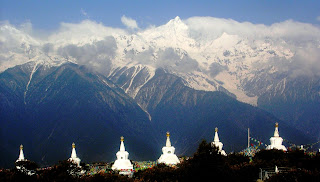 Just before the first Tibet check point - Dequen 2005
On July 7th, 5 years after I return to Canada from Lhasa I will embark in a new self-supported cycling journey that will take me from Dushanbe, Tajikistan to Nepal and possibly India (Sikkim) via Kyrkyzstan, China, Pakistan and Tibet crossing some of the most impressive mountain ranges in the world - The Pamirs, the Korakoram, the Kun Lun. See Route: map 1
Given the current interdiction by the Chinese authorities for independant travellers in Tibet it might not be possible to cycle in Tibet. In this case the alternative road to Kathmandu would be Korakoram Highway to Lahore then in India through Himachal Pradesh and Uttarachal and into Nepal. See Route: map 2
In Dushanbe I will meet with two French cyclists who have a similar route planned. One of them is riding a Trike. To see her website click this link Trans Himalaya

In the early stage of this project I had envisioned to use this adventure as a foundraiser for a charitable organization but I wasn't already involved in such organization and wasn't too sure how to approach it.  I didn't want this adventure to be only about traveling. I trusted that the "universe" would point me to the right organization. One day while browsing Pat and Baiba Morrow's website I read about their film  The Magic Mountain. it is a film about Cynthia Hunt and her amazing work in Ladakh, India. I was immediately inspired by her work and philosphy. Through her organization website Health inc.  I realized that they receive some of their funding from  The Mary A. Tidlund Chritable Foundation based out of Canmore. I immediately contacted them. Few weeks later I had the chance to meet Cynthia in Canmore and I have decided to raise money during my journey to support the Ladakh Project.

Please go to the Mary A. Tidlund Charitable Foundation page on my blog for more information on the specific projects in Ladakh I am rasing money for. 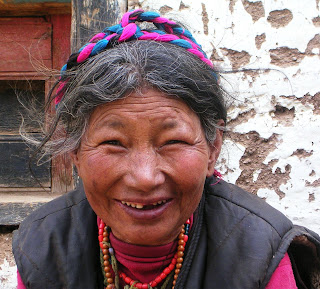 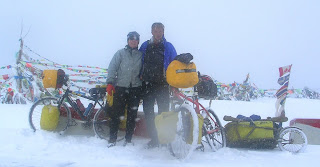