Into the wild and cold of the Aksai Chin

Since the Kudie checkpoint I have been hoping to get to the Aksai Chin. The Aksai Chin is a very unique place because there is nothing there except for a few truckstops. The altitude is very high (4,800m to 5,000m), water is sparse, the wind blows in all directions and the temperature at night drops to -25C or lower.  What a great place for cycling!  It is like the Pamirs on steroids!!! 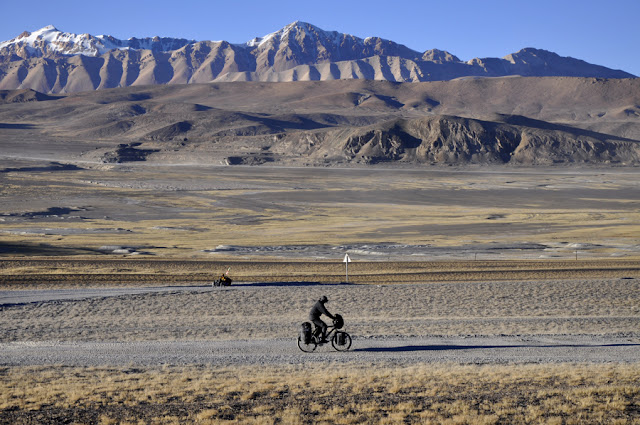 After graffiti'ing the wall of the cyclist museum we started a 25 km climb to Kithai pass (5200m), which is the beginning of the Aksai Chin. A few kilometers down, on the other side of the pass, we met a young Tibetan man who was sitting beside his vehicle with the motor laying out on the ground beside him. He was waiting there for God knows how long, but was smiling and happily. Broken down trucks are a regular scene on the road to Tibet, they usually do the mechanical repairs right on the spot. I'm guessing that calling for a tow is not an option.  Two or three days later this Tibetan friend passed us on the road. 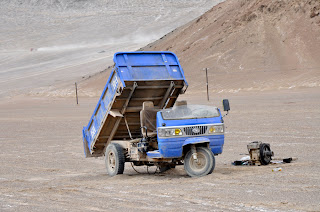 Aksai Chin is a disputed region located in the northwestern region of the Tibetan Plateau north of the western Kunlun Mountains. It is entirely administered by the People's Republic of China as a part of Hotan County in the Hotan Prefecture of Xinjiang Autonomous Region. It is, however, claimed by India as a part of its state of Jammu and Kashmir.
The area is largely a vast high-altitude desert including some salt lakes from 4,800 metres (15,700 ft) to 5,500 metres (18,000 ft) above sea level. It covers an area of 37,250 square kilometres (14,380 sq mi).

The region is almost uninhabited, has no permanent settlements, and receives little precipitation, as the Himalayas and the Karakoram block the rains from the Indian monsoon. Wikipedia- 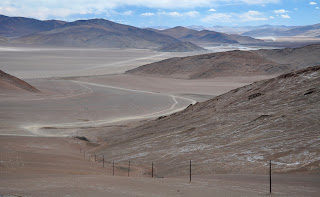 Our riding time was reduced to a few hours a day on the Askai Chin. In the morning we had to wait until the sun hit the tent to get out and warm up enough to ride. The water in the tent was frozen solid in the morning. We would set up camp just before sunset, get inside our sleeping bags and cook in the vestibule of the tent. I wore my tuque and all my warm clothes night and day for several days! Most nights I was able to stay warm until about 4AM, thenI would wake up cold and could not back to sleep afterwards.

Keeping our feet and hands warm while riding was also challenging, especially when we had strong winds (daily in the afternoon) and cloudy skies. The worst night was at Lugmo Tso, a beautiful lake perched at 5000m. Even in my tent with my -18C sleeping bag, I could not get warm enough to sleep. It was a long night. 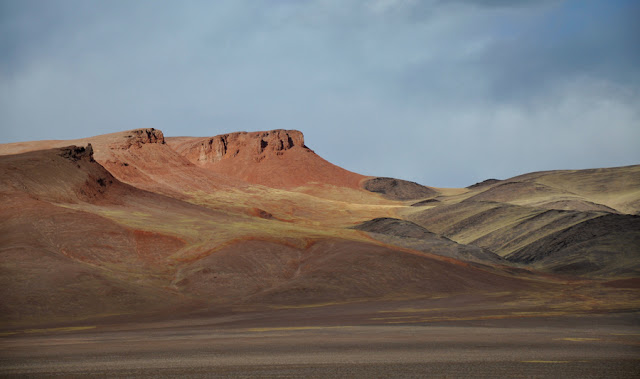 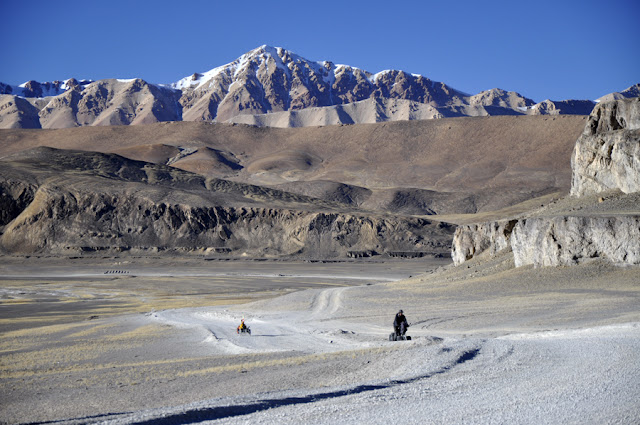 In Sumxi we had the chance to meet a Chinese cyclist coming from the other direction who told us where all the checkpoints between Sumxi and Lhasa were. This allowed us to plan a little better. Sumxi was just a very small truckstop, it had one room only, and the owner cooked us a very good meal. A nice change from the two minutes noodle soup and army bars. 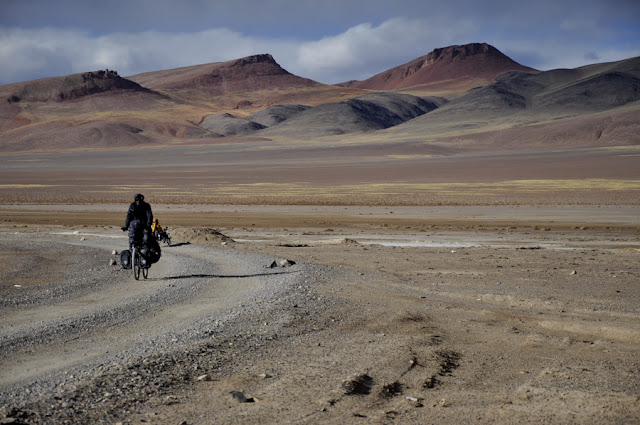 The Aksai Chin, even with its cold nights was amazing, and it was worth the trouble we had to go through with the PSB!!

I hope you have enjoyed these two last updates. Two more to come.
As usual I am always happy to hear from you.  See a few more pics below.
Peace,
Celine from Kathmandu 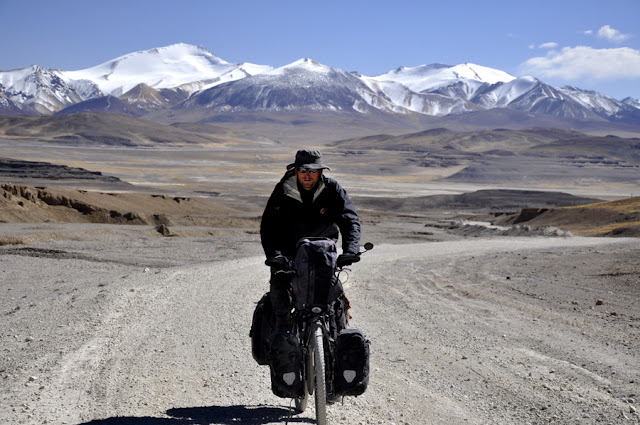 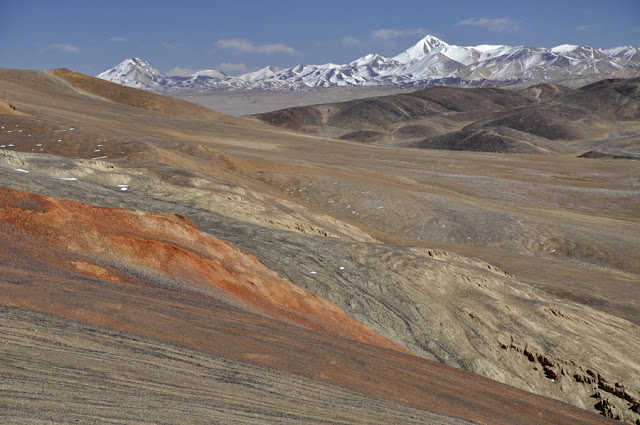 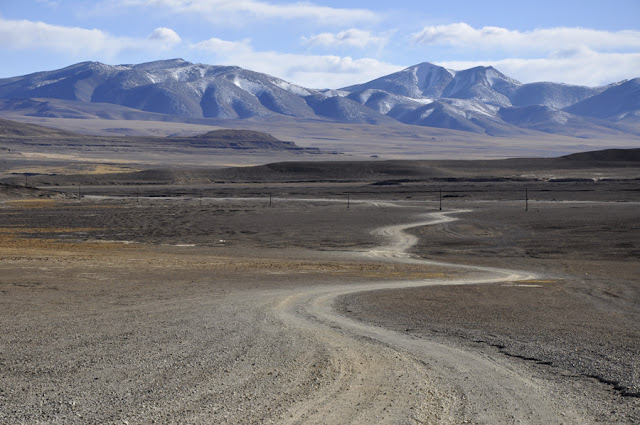 Amazing pictures. Glad to hear your travels are going well

Wonderful places you have seen and experienced. I'm looking forward to seeing and hearing more of your adventures. Wishing you safe travels.

Oh man Celine, I am in awe of your adventure. And I agree - your pictures are truly amazing. Nothing new to report from Calgary. cheers, Loren

These are your best pictures so far!
Keep on pedaling!
J'adore voir ces beaux paysages!
Salut

BTW, pics 11 and 13 from top are of this beautiful mountain:

Wow, the pictures are stunning. I admire your tenacity as I wouldn't survive the weather nor the dining delights.
keep the stories and pictures coming.
cheers from Calgary

These photos are like non other. Stunning and unique. really enjoy your posts...read every word (with envy, except for the freezing cold temps).