This is the final episode of the Tibet story! I know few other cyclists who had to “deal” with the PSB but 7 days in their company was very long! Usually they fine them and get them out of Tibet on a bus. It was a bit of a gong show and was hard to follow at time!

I will certainly return to complete the route. Maybe this spring or later. It is the only part missing to be able to draw a line between Dushanbe and Bangkok so I want to do it and see the scenery. I don’t think I will ride illegally in Tibet anymore. Been there, done that twice. I am done with night riding through checkpoints. There are many places to ride in the world outside of Tibet that are hassle free so I think I will concentrate on cycling other part of the world for a while. Also the Friendship highway (Lhasa to Kathmandu) portion of the ride is not so interesting for me as it is a full on touristy road, cycled by thousands of people year after year.

Below is the detailed story of our week with the PSB. Of course I didn’t take too many photos during that time!!! 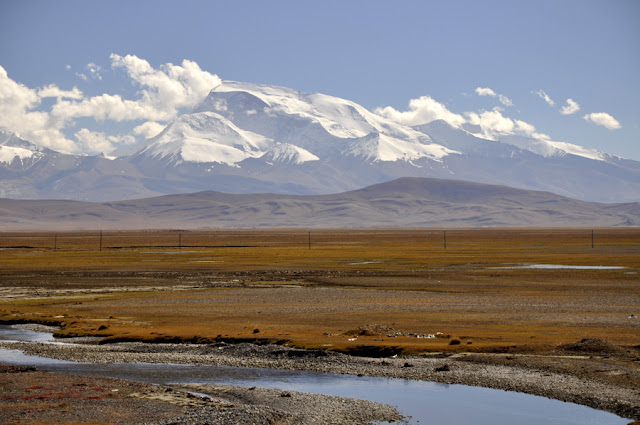 Ali was the half way mark for us. The day we passed Ali checkpoint was a stepping stone. Unfortunately the PSB was “waiting” for us since their colleague from Rutog had called them. They found us on the road by the end of the day. First one agent stopped and told us that two of us had to go to Ali with him to get a permit and one of us would stay on the road with the bikes and that once we had a permit we could continue on....this was a lie. While Anne and Pierre went to Ali with the officer I relaxed enjoying the sunset on the side of the river thinking that this didn’t feel right....that lasted about one hour when one more vehicle came and the officer told me I had to go to Ali too. He spoke enough English and asked me where were slept in Ali!!! He said he looked in every hotel in town for us and also that we were in trouble!! At that point I was a little nervous because I wasn’t sure what was going to happen. I was dropped at the same hotel Pierre and Anne were and we were told that he would pick us up the next morning to go to the PSB office...

At that point we knew that our trip to Tibet was over.

Day2: we spent half day at the PSB. They very slowly went through their process of asking questions, write everything down manually and fine us for 500 Yuan. The younger officers were “nicer” and tried to convince their supervisor to let us continue to the Nepal border in a jeep that we would pay. This was an ok alternative for us as we were on our way to Nepal anyway but the supervisor did not agree and decided to send us back to Kashgar. In the meantime they told us that since we had already cycled a long and hard way they would drive us to Mont Kailash (for free) so we could see it.....This defied any logic!!!!

Day 3: Two officers and the wife of one picked us up at the hotel (we also stayed for free) and drove us all the way to Mont Kailash and lake Manasarovar for the day and back (500km trip ). The driver was absolutely insane. We were driving 140 km/hour and he was incredibly grumpy.....not much we could do!

Day 4: they decided to drive us back to Kashgar......yes! two big Toyota SUV with all our bikes and equipment, two drivers, one officer (girl with good English), the nasty supervisor and 3 other men we had no clue who they were!!! Total two vehicle and 10 persons on their way to Kashgar. A two long days trip over high altitude passes on a very bad road....two days to UNDO what we had cycled in one month!!! At that point it really started to be like a bad nightmare that would never end. We had the chance to have a very nice driver. A Tibetan man who spent all day signing while driving. At first we thought that once in Kashgar they would let us go but on the second day I asked the English speaker officer what they would do in Kashgar and she answer “negociate your exit”!! So I said WHAT? She said we had to go to Kashgar PSB and then wasn’t sure what was going to happen!!! The stress level went up a notch! We also found out on the second day that one of the passenger was a “business man” from Ali. When we returned to the car after lunch he was totally drunk (and stupid).....a big fat drunk Chinese man who was spitting and chain smoking all afternoon....

Day 5: they agree for us to stay at the same youth hostel we stayed before. They were staying in a fancier hotel not too far from there. It was funny to arrive at the youth hostel in a police car!!! There were few cyclists there who were anxious to hear about our experience. When we explained what happened to the friendly Uyghur staff they were very proud of us!!! We had to wait until late afternoon for the PSB to call us and tell us to meet them at their hotel. We expected that we would then go to the Kashgar PSB office but NO! The Kashgar officer was with all of them in a hotel room and that is where “our exit of China” was negociated.....we sat on one of the bed and they told us we have to leave, that they had been nice to us by not cancelling our Chinese visa, blablabla! We suggested to exit China to Pakistan which would have been perfect (cycle the Karokoram Highway) but they didn’t agree to it pretending the border was closed....there were not too many options left.....flying from Kashgar to Nepal was the next one so off we went with the officer to a travel agency to buy a ticket to Nepal but after they did the first leg of the trip (Kashgar to Urumqi) they seemed to be satisfied so we went back to the hotel with a plane ticket to Urumqi......again this made absolute no sense to us but at that point all we wanted was to get rid of them and if a ticket to Urumqi was going to do it so be it!

Day 6: we spent all day getting ready to fly the next day.....walking “freely” in Kashgar without our passport!

Day 7: we met them at the airport to find out they were coming to Urumqi! I could not believe it. We didn’t know if more hassle was waiting for us there or if they were just going on vacation. The officer told us they were going for few days vacation but at this point we didn’t believe anything from them. Once we checked in they gave us our passport back and told us it was over....once in Urumqi they went their way and so do we......after 7 days we were finally free!!!!

After we returned to Kashgar I decided to fly directly to Nepal to catch the best of the trekking season and continue my travel without Anne and Pierre.

Over all it was great to be able to cycle all the way from Kashgar to Ali. The scenery was stunning. It is truly a great road to ride.

Far out. I've just been google mapping trying to figure out all the to and fro-ing you did. That's sure some crazy back and forthing. I think, at this point, I'm surprised you didn't get yourself a stay in a PSB "hotel"!!! Are you going to do a lecture tour when you get home? Go around to all the schools and educate all the kids on travelling in China? I could only groan when I saw the picture of the washboard road. ug.