It is a short 320 kilometres between Sary-Tash and Kashgar with great scenery, a nice paved road and little traffic. Part of it is very arid and has colourful rock formations. We are approching the Taklamakan desert after all! Cold winds are on the menu for the first pass, but there is nice weather after that. This is just a teaser for the weather awaiting us in Tibet. 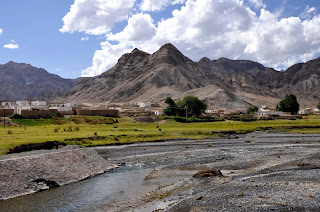 The border crossing takes little time and all goes smoothly. On the Chinese side the first step is the luggage search (not very thorough), then they fill out entry forms (done by a nice Chinese officer), next we visit the customs counter, we get our luggage scanned, and finally get our passports stamped! Welcome to China. No questions were asked about our intended destination and they didn’t find the Tibet maps meticulously hidden in our bags! 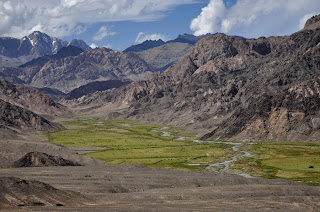 The first night we slept at a local's home, but they only wanted the money and had zero interest in communicating with us. We were spoiled by the Tajik warm hospitality, so it was a bit of a shock. It got a little entertaining when we refused to give them the amount they wanted because they didn’t bring any food, as agreed. They asked us to leave...no negotiations possible. Well, packing up the bikes at 10PM in the dark wasn’t a very nice option, so we gave them the money they wanted so that they would leave us alone. We cooked rice on our camping stove!!

The next day we arrived late afternoon in a small village where we expected to stay, but again no hotel or guest house, so we cycled another 24 km with a head wind, and arrived in Wuqia tired and hungry. We found a small hotel, got all the gear and bikes upstairs and then we were told to wait....but wait for what? We wanted to have a shower ASAP and eat!! Well this is China, so 10 minutes later the police showed up and told us we couldn't stay there, we had to move to the official foreigner hotel at 8PM. You must be kidding?! No, they were not kidding.

The police arrived with a very nice English teacher as a translator and offered to move all our luggage in their car, so it wasn’t that bad. All we had to do was follow the police car for one block. After filling out forms and getting settled in our new room, we finally ate at 10PM. Turned out that the hotel room was great, with a nice hot shower and good beds, which was quite a luxury for us after 6 weeks in Tajikistan. The price was right too, about $25US for the 3 of us!

We got up Sunday morning late after enjoying a good night of sleep in our “super hotel”! Our first mission for the day – get some cash! We decided to take a day off here before going to Kashgar, but first we needed to get Yuan, as we had nearly spent the little we had (brought from Canada from previous trip).

The ATM machines were empty. No cash. Next we went to the bank (open Sunday – these Chinese, they never stop working!), and finally a customer tried to help us by telling us it wasn't possible to get Yuan or change for US dollars. In the meantime, we decideed to look for an internet cafe and read our emails, but there was no chance. The internet was reserved for Chinese only, they swipe their Chinese identity card (so they can watch them). The owner asked us to sit and wait and after 20 minutes 3 police agents came and explained to us that we can’t access the internet.

While Anne and I were at the internet cafe being the entertainment of the day for clients and police, Pierre went back to the ATM and got some money. Awesome. We could now relax all day in Wuqia: do laundry, rest and of course work on our blogs! Next to the hotel there was a Reflexology salon, so I also treated myself to a one hour foot massage!

Everything was great, then all of a sudden at 10PM someone knocked at the door. We looked at each other and we knew it was the police. The night before the officer had mentioned something about being allowed to spend only one night in town, but we sort of ignored it, I guess he was serious. He asked why we were still here and we said one of us was sick. They agreed to let us sleep there an extra night and  we had a good laugh about running into the police 3 times in 24 hours, and almost getting kicked out of our room 3 times. Not promising for Tibet! It seems like they are in a complete paranoid mode about foreigners. Even in 2005 when I cycled in Yunnan we never had to deal with the much police attention. Hotel and internet access were not a big deal.

We finally arrived in Kashgar and got a room at the Old town Youth Hostel. It has a nice courtyard, which was a nice little oasis to escape from the noisy town. As a bonus, the hostel had Wi-Fi. The only issue was that Blogger was not accessible in China. Well, we knew that, so we spent a  few hours looking for a proxy to get around that problem and I ended up buying a VPN connection which worked perfectly.

Kashgar is very small town for China with 300,000 people. After the peace and tranquility of the Pamirs it took a bit to get accustomed to it. The Youth Hostel is located in the old town in the Uyghur area close to a mosque, so it was not too“Chinese”, which is a good thing! There are other cyclists at the hotel and most of them are heading to Sichuan, Yunnan or other part of China. We seem to be the only group heading towards the forbidden Tibet! 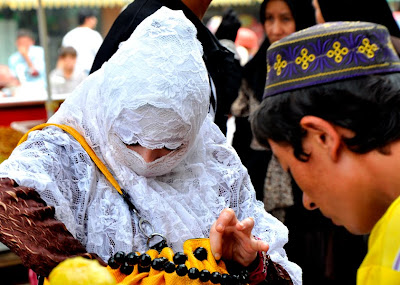 Anne and Pierre had to wait for parcels here, which gave us time to catch up with our respective blogs, call friends and family, rest, do some bike maintenance, and relax before the big push to Lhasa.
Today was the Sunday market so we took the bus and spent a couple hours wondering around. Nothing that spectacular but we don’t have much else to do! However on Sunday morning something rather unusual happened. All of a sudden the entire city was filled with a fine sand. We could not see the sun anymore and the temperature dropped (a good thing!). It is because we are close to the Taklamakan and we get sand from a storm. Everything is absolutely full of sand....not very good for the camera and computer! 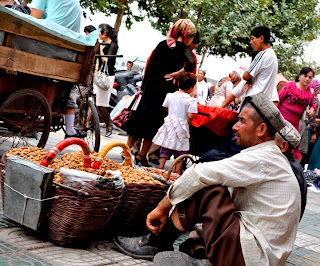 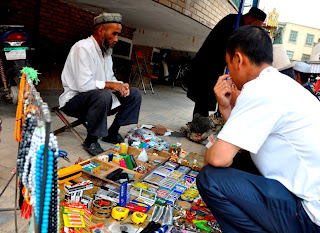 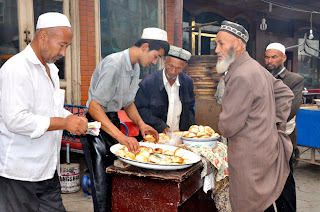 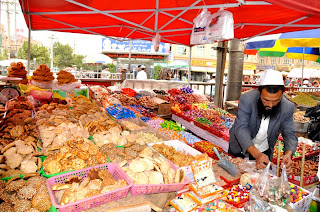 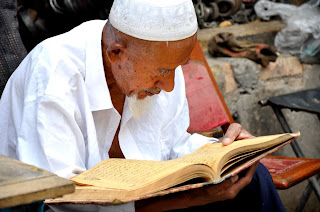 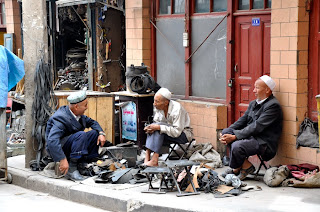 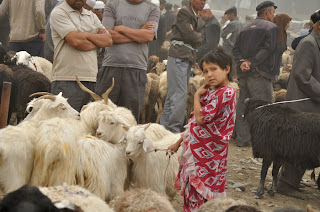 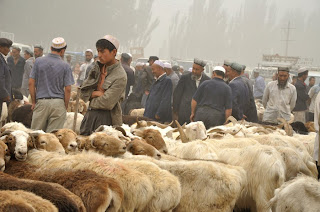 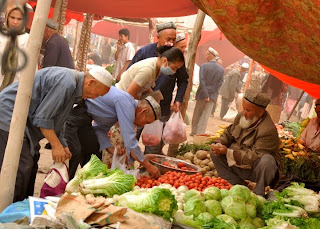 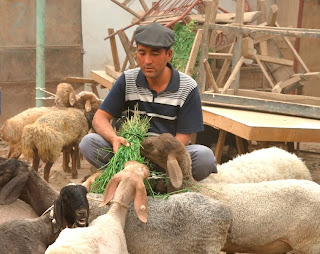 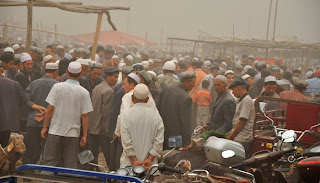 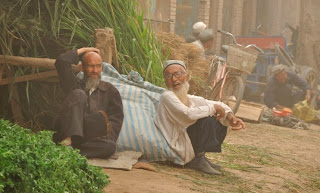 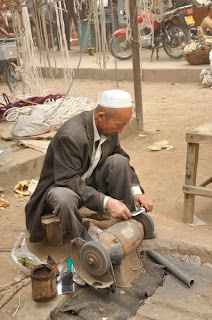 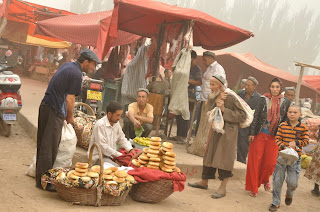 Finally, for those of you who are interested in number,s here are a few and a map of the road travelled so far:
• Distance cycled: Dushanbe to Kashgar: 1,705km
• Elevation gain (vertical meters climbed on the bike): 22,114m
• Trekking distance: 53km
• Trekking gain elevation: 2,470 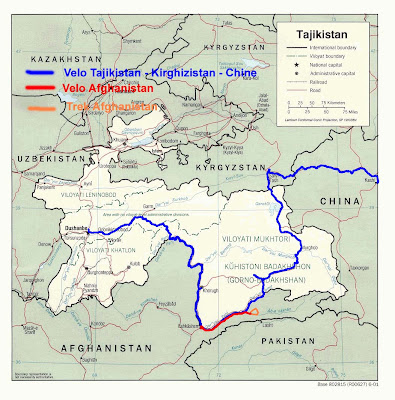 Thanks for all your comments and emails. It is always a pleasure to get some news from you. Also Thank you for your donations to the Ladakh Project.

Note: All pictures can be seen on my flickr stream (link below). Only few selected photos were included in the Blog. From the Flickr page you can select "slide show".
http://www.flickr.com/photos/celine_soulard/sets/72157624751670085/
Posted by Celine Soulard